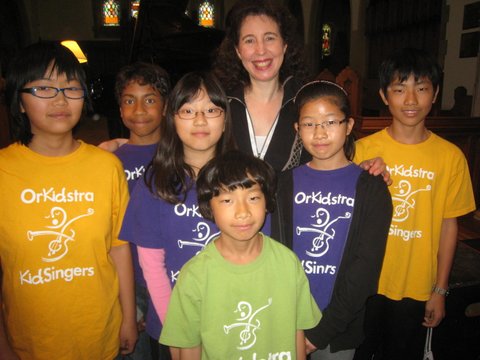 The Leading Note Foundation today announced that Angela Hewitt, renowned international pianist, has accepted the Foundation’s invitation to be its first Ambassador for OrKidstra.

In accepting the honorary position, Ms. Hewitt said “The Leading Note Foundation, through its OrKidstra programs, has shown how music can change the prospects of children who would not otherwise have the opportunity to learn an instrument.  I am delighted to lend my name to their efforts.”

Susan Carter, Chair of the Board of The Leading Note Foundation, commented on Ms. Hewitt’s acceptance, saying, “Ms. Hewitt has been most supportive of us over the years and we are excited to recognize her interest through this appointment.  Her acceptance underscores the professional standard which our programs have achieved.  Ms. Hewitt will inspire students and teachers alike.”

The formal appointment will be celebrated with music at Tabaret Hall on Sunday, September 28th at 3 p.m.  Laurence Wall of CBC Radio will emcee the hour-long program during which Ms. Hewitt will perform on her own and with OrKidstra students.  Donations will be requested at the reception following the celebration. Seats are limited and must be reserved ahead at ambassador@leadingnotefoundation.org .

Ms. Hewitt was born in Ottawa and first studied with her mother Marion (who was a Music and English teacher at Glebe Collegiate) and father Godfrey (organist and choirmaster at Christ Church Cathedral for almost 50 years). She performs the world over, yet retains affection for her home town.  In 2012, she invited OrKidstra children to attend one of her rehearsals, and in February 2013 she attended one of theirs.  OrKidstra looks forward to welcoming her often over the coming years.

The Leading Note Foundation, a charitable organization, supports OrKidstra—a social development program which, through the joy of learning and playing music together, teaches children life-skills such as commitment, teamwork and tolerance and also strengthens their numeracy and literacy.  Drawn from Ottawa’s dynamic inner city neighbourhoods, 94% of the children learn to play at no cost, from professional teachers and on donated instruments.   OrKidstra students currently come from 42 linguistic and cultural backgrounds—the new face of Ottawa.

The Foundation was established in 2007 by Tina Fedeski (Executive & Artistic Director), Margaret Tobolowska (Director Emeritus) and Gary McMillen (Board Member) and is inspired by the El Sistema movement developed in Venezuela 40 years ago.  The community music program has grown from 27 to over 300 students since 2007 thanks to donations from the general public with additional funding from provincial and municipal grants, foundations and corporate sponsors.

Information on the event, The Leading Note Foundation or OrKidstra:  www.leadingnotefoundation.org ;