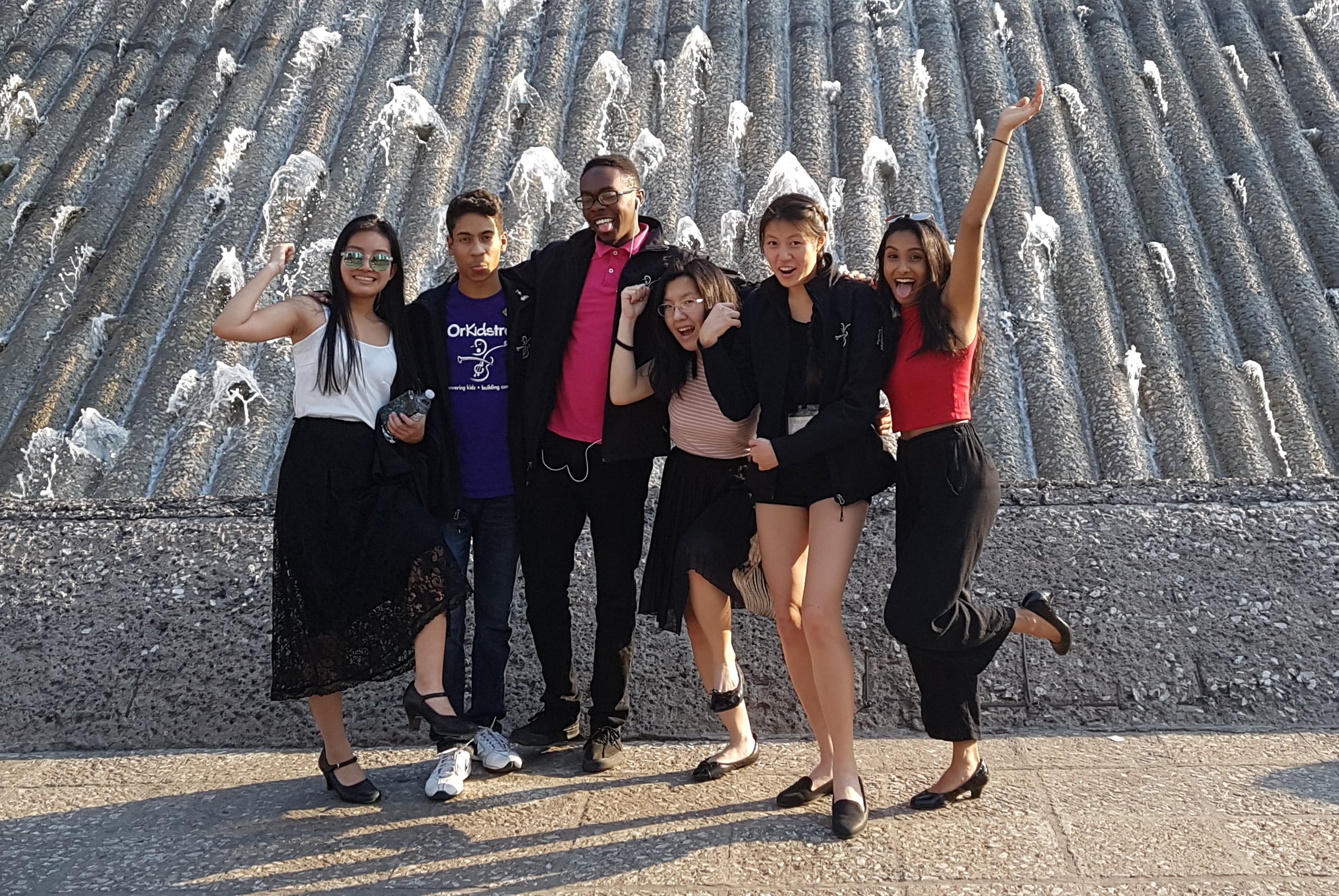 “For this opportunity to play under the baton of legends, Arturo Márquez and Gustavo Dudamel, I will be forever grateful.”

“Hi, my name is Evelyn and I’m 14 years old. I’m from Ottawa, Canada and have been with the OrKidstra program for about six years. Ever since I was five I’ve wanted to play the violin, however, it wasn’t until I turned eight that I was given that opportunity with OrKidstra. I could never have imagined a future like this for myself, which is why it’s still hard to believe that it all happened. Every step of the journey I learned something new so it is my honour to share my experience at “Encounters/Encuentros: Music Unites the Continents.”

My first impression of Mexico City was that it was really loud. We arrived at around 1 am so I might not have been completely awake but the sound of Mexico traffic definitely kept me up. The hotel rooms for us only had two beds, which was lucky for the boys because they had their own room and got a bed for themselves, but there were 4 of us girls so we had to share beds. I was exhausted but Nancy, Rinila and Jen and I couldn’t stop laughing and taking pictures in our room and of our view (we were on the 24 floor!) I don’t remember falling asleep because we were all talking and laughing. I remember going to sleep feeling really nervous and unprepared for the first day of rehearsals because we had gotten the music just a few days before. I ended up falling asleep at around 4 AM and trust me, sleep never felt so good especially when you’re expected to be awake again in 4 hours. The feeling of being in another country hadn’t hit me yet which was surprising since so much of my day had been spent in airports or planes but for whatever reason, it just didn’t feel like I was in Mexico yet.

The first rehearsal was so exciting. There was usually one Mexican university student per stand which was slightly intimidating because I was listening to them warm up and I was I was thinking WOW YOU’RE INSANELY GOOD. I sat down in the middle of my section (second violins) next to a super cool guy named Javier (he’s one of the university students) and my palms were SWEATING. I felt like I was sitting in a good place because I was able to see the first stand and conductor, but someone from the second stand didn’t have a stand partner so they asked me if I wanted to move up. One side of me was saying EVELYN, SPRINT FOR THAT SPOT AT THE FRONT. YOU WANT THE SECOND STAND. But the other side of me was saying YOU SURE ABOUT THAT? YOU GOT THIS MUSIC 3 DAYS AGO. So I decided to stay where I was with Javier for the first day and see how it goes. It went a lot better than expected. The John Williams Adagio for Strings is SO beautiful. I truly wish I could relive playing that piece, especially when there aren’t any recordings of it and we don’t have the sheet music anymore. We all had to sight read that piece when we got there because they weren’t allowed to distribute it so I was worried that I wouldn’t be able to play it. But when I saw the music for the first time, I sighed with relief in knowing that it didn’t seem difficult at all.

The sectionals were a lot more intimate in the sense that if you messed up everyone in your section definitely heard you mess up. We all moved around so we were all sitting next to somebody new. The stand partner I had this time had two mini donuts with him and he was so kind to share with me. I introduced myself to him and luckily he spoke English pretty well so he introduced himself to me too. Guess what? His name was also Javier and he’s also one of the Mexican university students. Throughout the days of sectionals, Javier and I were just laughing at each other whenever we would make silly mistakes and at one point switched our instruments while playing just for fun. He gave me tips for some passages that were tricky and translated the jokes that were in Spanish for me. On the very last day, he asked me if I was going into music in the future and I had to give him the honest answer which is I don’t know.

The tutti rehearsals went from exciting to intense when we were told Maestro Gustavo Dudamel was arriving soon. The idea of his presence put me on edge and suddenly I couldn’t stop repeating the tricky parts of Dvorak in my head. My new stand partner, Amber, was so excited to see him that she had her phone ready to take pictures of him for he arrived. Even though we were all warming up you could still feel the anticipation in the room. When he arrived everyone stopped playing and I quickly whipped out my phone to take some pictures of him, and I did get some good ones. The rehearsals with him were scary because we were all trying hard to impress him but some of his ideas were different to what we rehearsed earlier so we had to quickly adjust. His energy reflected the energy in the room so we tried to reflect that energy in our playing.

Morning of the concert I went down for breakfast with the girls in concert attire and with our instruments. When I saw all the different groups in the dining room, I felt really sad because this was the last day we would play together. I still miss teams New Brunswick, New York, Venezuela and of course the Mexican students.

When we arrived at the concert venue, everyone was bubbling with excitement. All of the different countries took pictures with each other to remember this beautiful day, even though we hadn’t even entered the building yet. That’s when I realized that we all had just met 3 days ago and what brought us together was the opportunity to play music.

When it came time to play my favourite piece of the bunch, the Adagio for Strings, I knew that the held last note had to resonate. We’re supposed to hold our instruments up after the last note to let the sound and energy resonate with the audience until Dudamel puts his hands down. But I had no idea how long he would make us hold our bows. I held my bow and it was hovering slightly above the string because I wanted to make sure I wasn’t going to make any noise, but little did I know that I would have to be completely frozen for so long. My arm was cramping up and I just couldn’t hold it anymore. I decided to put my bow down on the string and I TRIED to do it silently BUT THAT DIDN’T WORK OUT. I slowly put my bow on the string BUT IT MADE A NOISE WHEN IT HIT THE STRING and to be honest a little part of me died on the inside. Other than that, it was a good result nonetheless. All of our excitement drove us to our final piece, Dvorak symphony 9 4thM, and I just poured any ounce of energy left into that piece. The standing ovation lasted for what felt like a lifetime. I was so proud and the energy from the audience was what refueled me and gave our orchestra the chance for an encore.

The final lunch we had after the concert was a moment I’ll never forget. Not just because we had a good lunch, but because most groups were leaving later that day. I got pictures with all my buddies from across the continent and, oh man, I miss them so much. With team New York, we just crack jokes and laugh, they are some of the funniest people I’ve met. Team Venezuela is so talented and they’re all so nice. I swapped jackets with a buddy from Venezuela for a picture and it was hilarious because his jacket was massive on me and my OrKidstra jacket was too small for him. We could relate to team New Brunswick, the other Canadian group the most. I loved how it took both Canadian groups to explain what poutine was to everyone else. The Mexicans are just the best and welcomed us with open arms and are always so kind. All of my stand partners at some point are from Mexico and I couldn’t ask for better stand partners. Javier was a great mentor and friend. Amber is only a year older than me which was so nice because everyone else was older or in university. These were some important people that made the trip even better.

I’ve made friends that I will stay in contact with even though we are across the Americas. Although our meeting again is unlikely, the memories we’ve made I could never forget. This was a once in a lifetime experience that brought us from countries across North, Central, and South America together to learn from each other and play in a world-renowned concert hall. I miss everything that happened in Mexico City, but I know that what has made me love it so much, gives me the power to remember these proud moments and cherish them. For this opportunity to play under the baton of legends, Arturo Márquez and Gustavo Dudamel at the Palacio des Bellas Artes, I will be forever grateful.” – Evelyn, 14, OrKidstra student (violin)

OrKidstra experienced this extraordinary program, “Encounters/Encuentros: Music Unites the Continents” in Mexico City, March 1-4, 2018, thanks to the generosity of The Gustavo Dudamel Foundation, which fully funded the music and citizenship intensive for all attendees and provided full scholarships for our students.