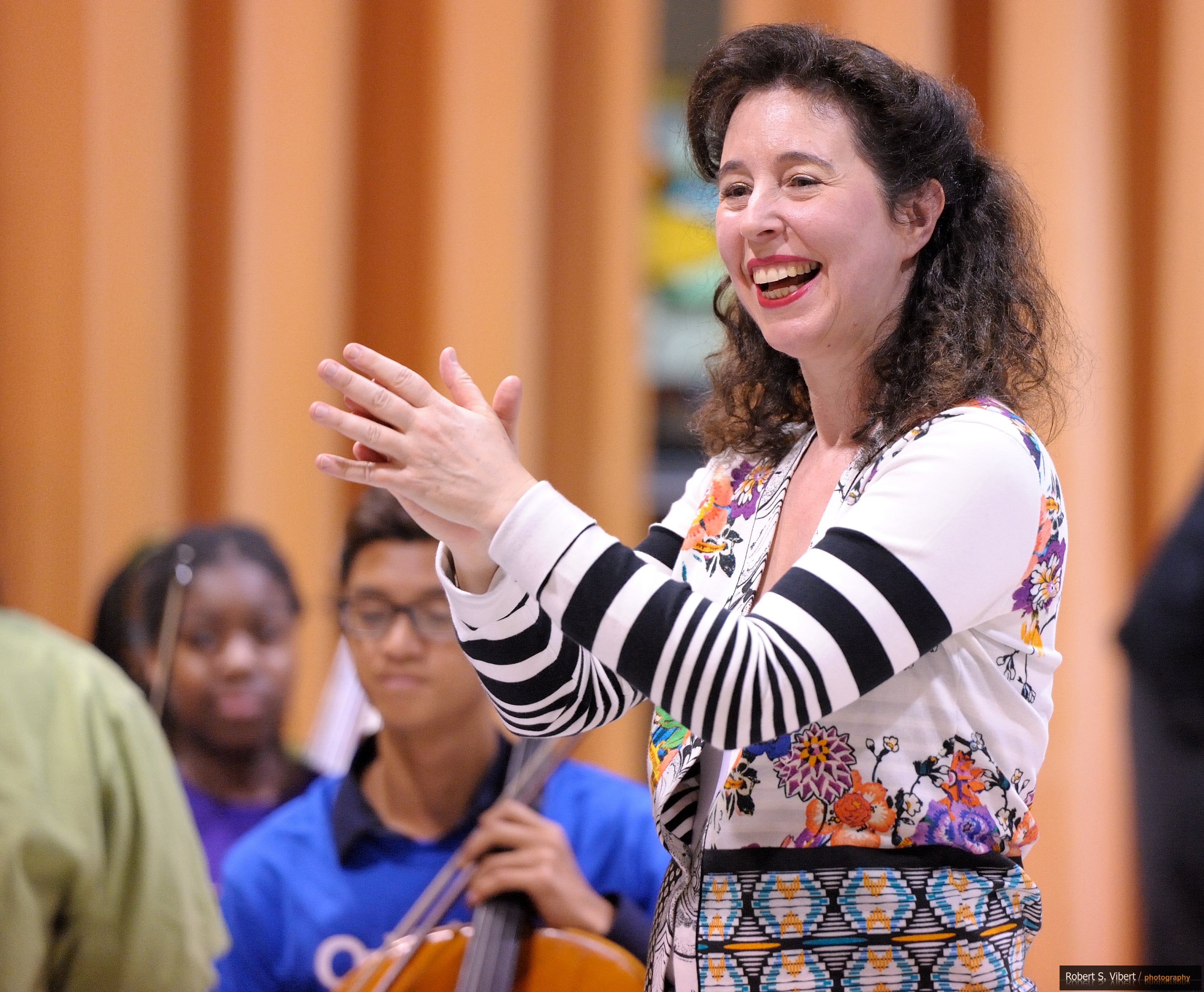 The Leading Note Foundation office was abuzz with activity this summer, preparing not only for September’s classes but also for a very exciting event: a concert in celebration of Angela Hewitt’s acceptance of the role of OrKidstra’s first Ambassador.

Ms. Hewitt’s relationship with The Leading Note Foundation began in 2012 when she invited some of our students to attend her rehearsal in Christ Church Cathedral and a few months later, in 2013, she visited us at the Bronson Centre during OrKidstra’s weekly rehearsal. She is an inspiration to our kids and teachers alike.

Thanks to the generosity of the University of Ottawa, the concert was held on September 28th in Tabaret Hall which was filled to capacity. Once the OrKidstra students had settled on stage, Laurence Wall introduced the program and Ms. Margaret led the assembled KidPlayers, KidSingers and KiddlyWinks in a thrilling performance of the theme from Star Wars.  This was followed by a moving rendition of To Young Canadians, a piece set to the words of Jack Layton in his letter to his compatriots before his death. The piece, commissioned by The Leading Note Foundation, was composed by CarletonUniversity professor and musician James Wright who accompanied on piano.

No OrKid stra concert would be complete without the 10 Leading Notes – our guiding principles – enthusiastically sung, snapped and clapped by the students, with audience participation of course!

As the stage was being reset between pieces, Mr. Wall questioned a few of the students about OrKidstra and their experiences at the Foundation. Ms. Tina lifted Favour Obazee, a 6-year-old KiddlyWinks student onto a chair during his interview. With big round eyes his answer to how much he liked KiddlyWinks was: “I love it 100%!” KidPlayers student, David Joseph, 16, gave a very dynamic answer about how OrKidstra is like a family to him. He even handed over his French horn to Mr. Wall to free up his hands while speaking!

Mr. Wall also spoke with Tina Fedeski and Angela Hewitt about the new position of “ambassador”. Tina expressed her excitement and gratitude, while Ms. Hewitt spoke about why she is lending her name to The Leading Note Foundation. “I really thought it was such an important thing to support this organization.  We have to get out of our heads that music is only for the elite … music is a basic human gesture … it’s in everybody. This is why I have lent my name, with hopes that my presence will bring more support to the Foundation.  Here is to music and to sharing it with so many young people!”

Susan Carter, Board Chair, presented Ms. Hewitt with a special baton, adorned with a purple handle (to reflect OrKidstra’s colour) resting in a beautiful wood case engraved with the OrKidstra logo.

During the hour-long concert, Ms Hewitt demonstrated her great and varied musical talent: not only did she play Three Spanish Dances by Granados on piano, she also conducted OrKidstra’s Senior and Chamber Strings in Bach’s Brandenburg Concerto No. 3 and then shouldered a violin to play Beethoven’s Ode to Joy with the kids in the orchestra! It should be mentioned that Mr. Wall joined in on the cello!

It is difficult to choose one highlight of this extraordinary concert! One of them is certainly the Camille St-Saens Clarinet Sonata, Op. 167 performed by OrKidstra’s 14-year-old Peter Perez, accompanied on piano by none other that Angela Hewitt.  Peter’s playing was elegant and the audience rose to its feet in appreciation. What an unparalleled experience for a young musician!

The afternoon was capped off by a lovely reception in the Rotunda adjacent to the concert hall. While enjoying refreshments, members of the audience had an opportunity to speak with Ms. Hewitt personally and to purchase her newly released CD The Art of Fugue.

Ms. Hewitt has promised to come for a visit to OrKidstra in January when she is back in Ottawa to perform in Chamberfest. We are all looking forward to it! 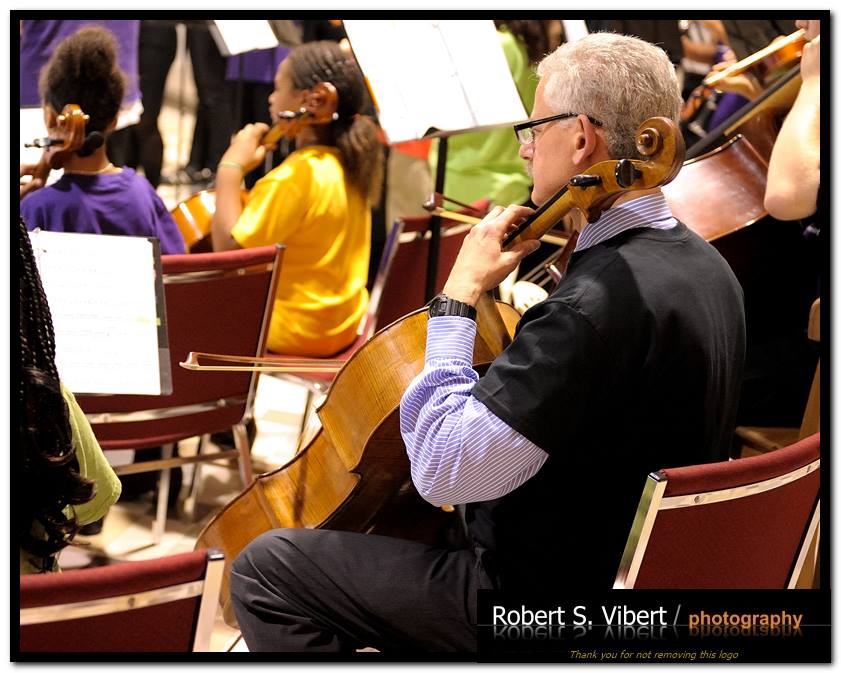 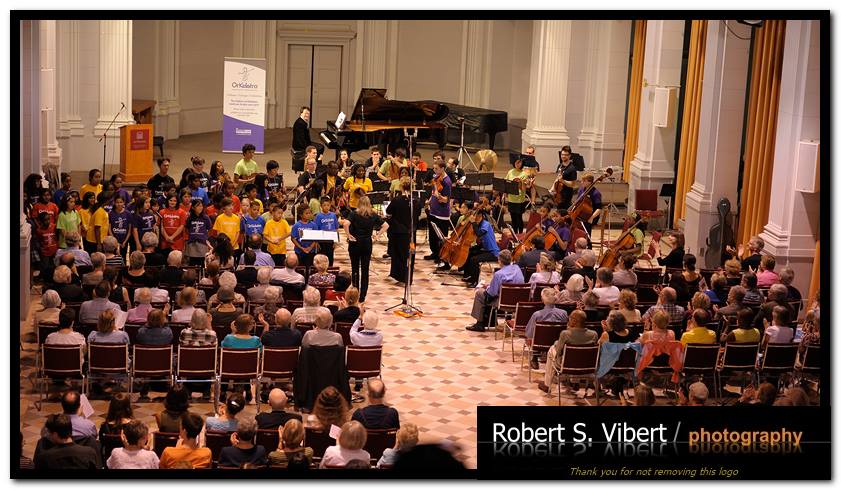 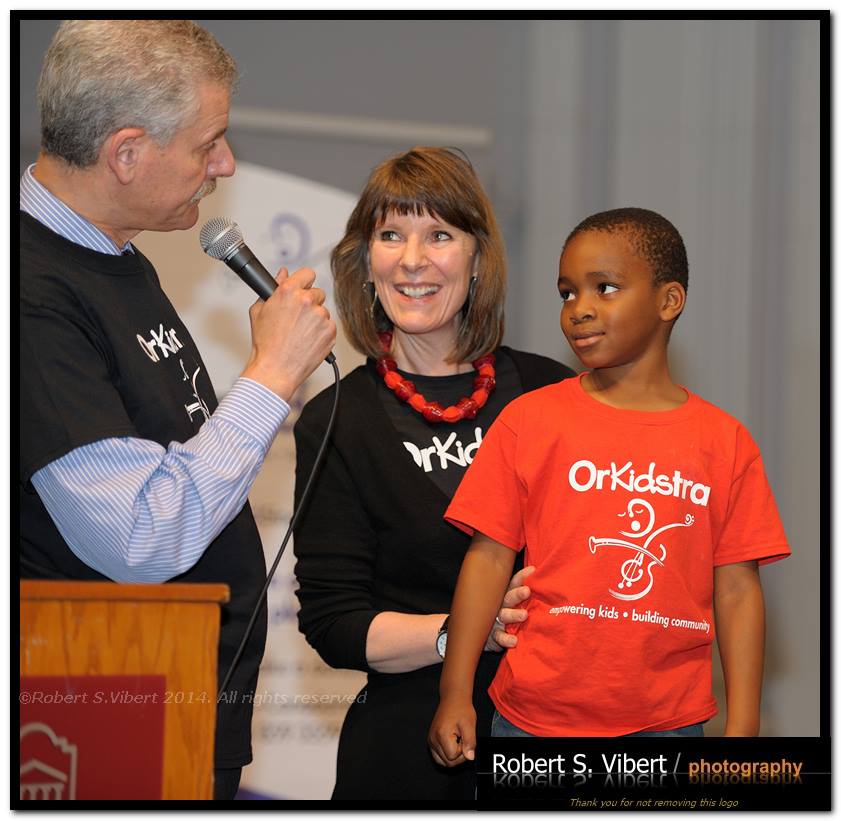 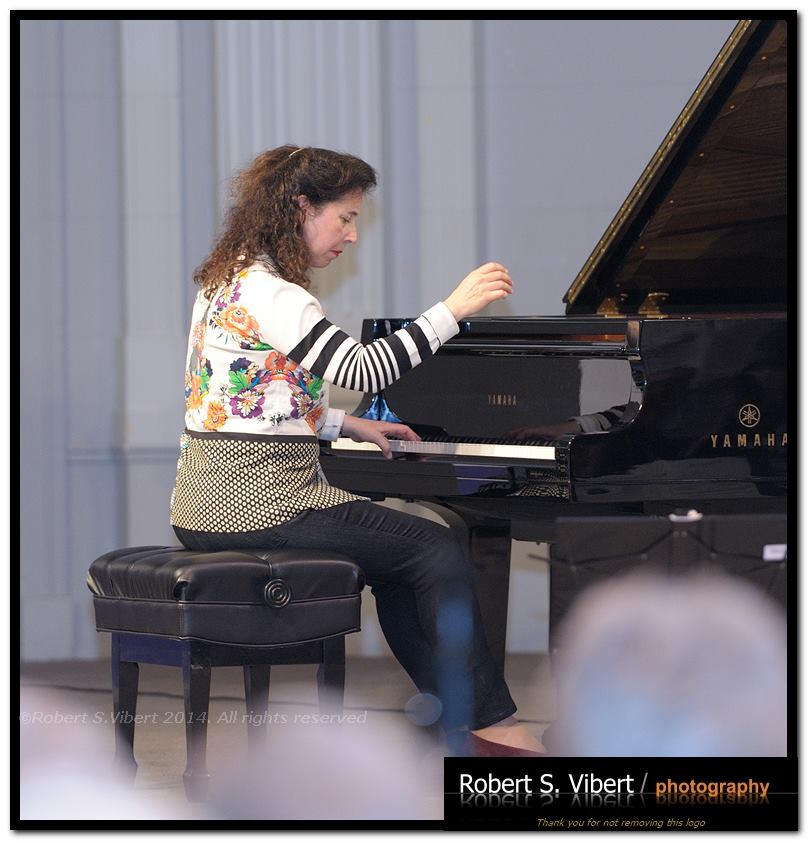 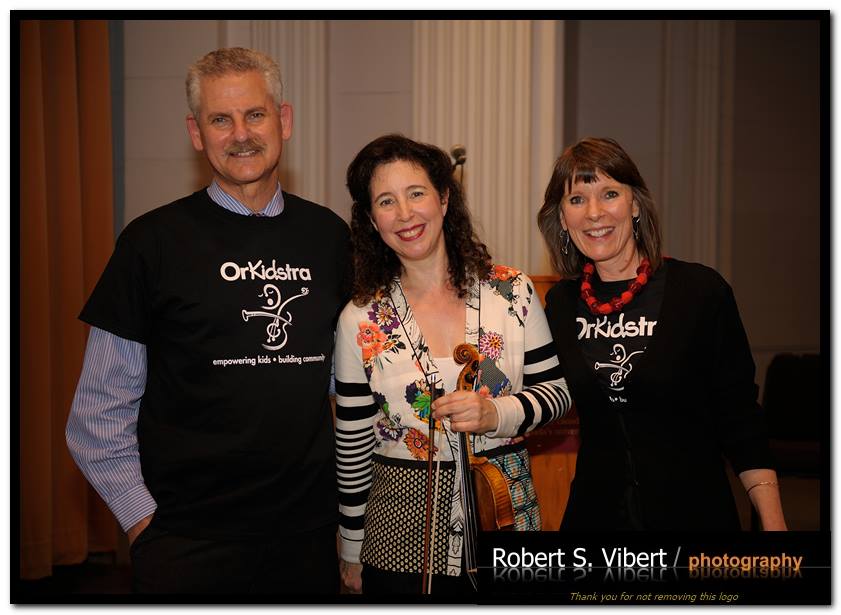 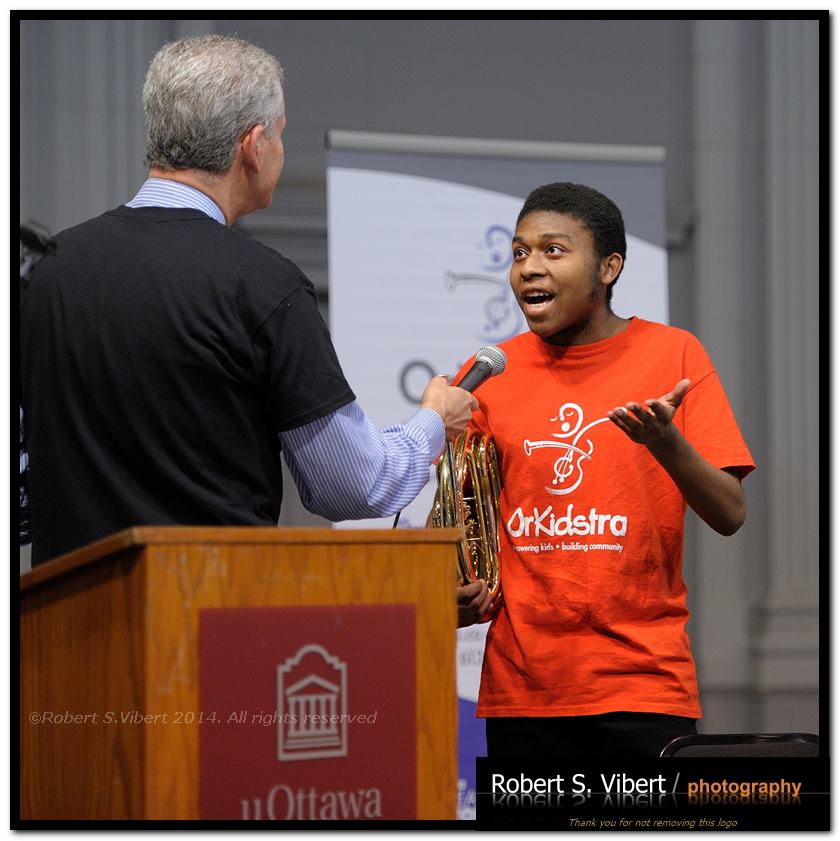 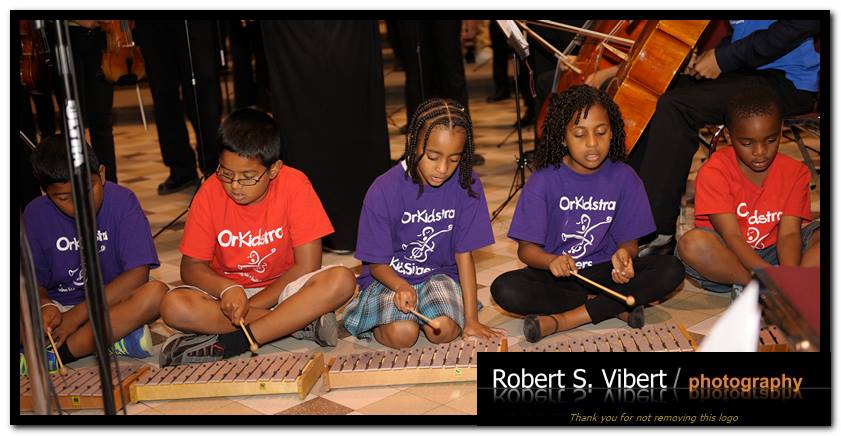 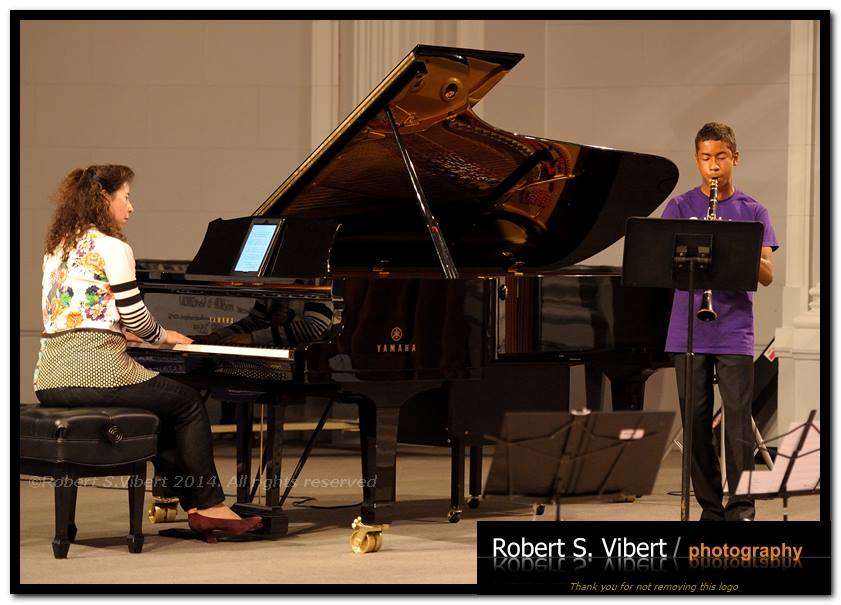 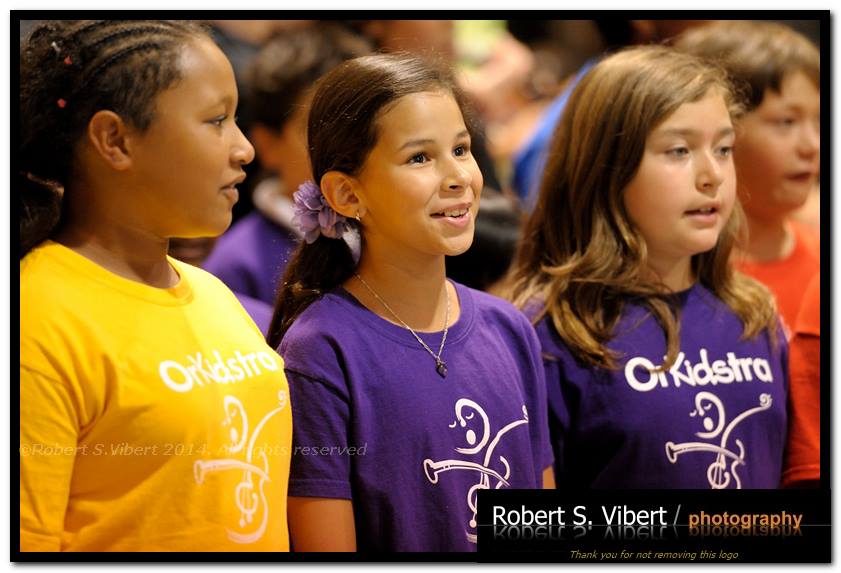