OTTAWA, Ont. – October 13, 2016 – Alexander Shelley, Music Director of the National Arts Centre’s (NAC) Orchestra; Chief Conductor of the Nuremberg Symphony Orchestra and Principal Associate Conductor of the Royal Philharmonic Orchestra, has joined celebrated pianist Angela Hewitt as an OrKidstra Ambassador. The announcement of the appointment was made by Claire Marshall, Chair of OrKidstra’s Board of Directors, and Mr. Shelley on Oct. 12 at the well-attended pre-concert chat preceding Ms. Hewitt’s beautiful interpretation of Beethoven, with the NAC Orchestra, conducted by Mr. Shelley.

OrKidstra’s mission is to empower kids and build community through the universal language of music in under-served areas of Ottawa. Mr. Shelley is committed to helping OrKidstra further this mission: “OrKidstra does two things at once: it helps kids to build confidence and to develop important skills like discipline and teamwork through music. By singing and playing together, under-served Ottawa youth will enjoy a lifelong love of music,” said Mr. Shelley. “Every time I work with the children of OrKidstra, I’m inspired by their skill and enthusiasm. I’m so pleased to be joining Angela Hewitt as an OrKidstra Ambassador and to have opportunities to support and help develop this incredible Ottawa-based program.”

Claire Marshall, Chair of OrKidstra’s Board of Directors, added, “We’re delighted to have Alexander Shelley joining Angela Hewitt as an OrKidstra Ambassador not only because of his international reputation, but also because of his commitment to making a difference right here in our community. The kids already love Alexander Shelley and we’re deeply honoured to bring him into the OrKidstra family as an Ambassador.”

As an OrKidstra Ambassador, Mr. Shelley will continue to represent and encourage support for OrKidstra in the wider community and to inspire the students with active engagement in the music world. Mr. Shelley will also conduct select performances by the charitable organization. Mr. Shelley appeared in the CBC TV documentary “OrKidstra: The Power of Music,” conducted OrKidstra and the KidSingers at the Opening Ceremonies for the Global Summit One Young World in Ottawa and will be the guest conductor for an OrKidstra event at the Rideau Club on Nov. 10.

On hand at the announcement, along with Ms. Marshall, Mr. Shelley and Ms. Hewitt, were Executive & Artistic Director and founding member of OrKidstra Tina Fedeski, NAC Director Music Education and Community Engagement Geneviève Cimon, numerous OrKidstra Board Members and an ensemble of OrKidstra instrumentalists (including cello, violin and clarinet) who played a selection of popular, world and classical music including “We Are the World,” “Sistema Samba” and “Jupiter” (from Holst’s The Planets, Op. 32).

OrKidstra is a social development program for children aged 5 to 18 living in under-served areas of Ottawa, Canada. The organization’s mission is to empower children and build community through the universal language of music. Inspired by El Sistema, OrKidstra carries out their mission by providing over 500 children, from lower-income families in Ottawa, with free group and individual music lessons and the chance to learn important life skills like respect, compassion, teamwork and responsibility through playing and singing together. Charitable Reg. # 83246 7153 RR0001 OrKidstra.ca 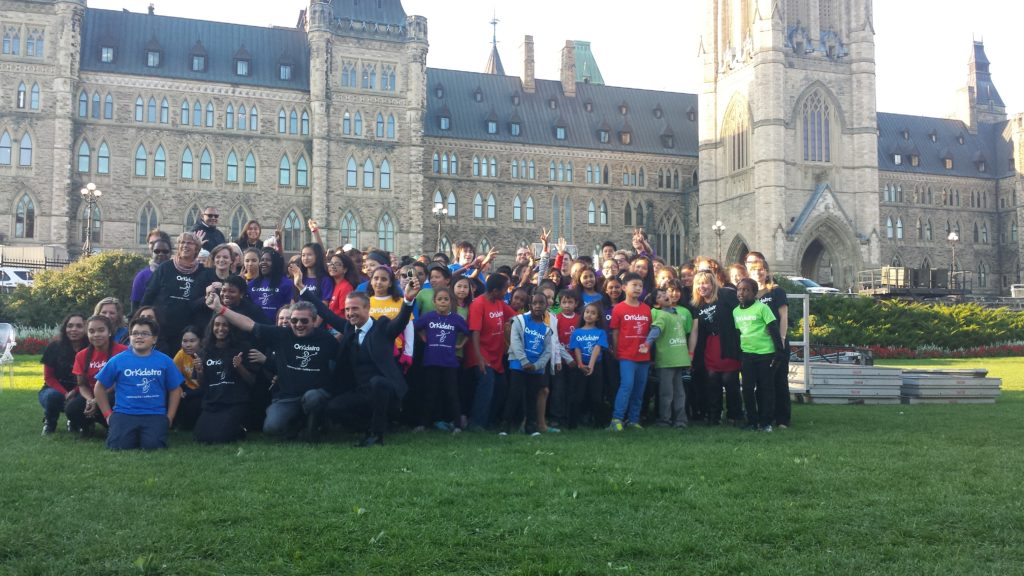 Alexander Shelley with OrKidstra at the One Young World Opening Ceremonies in Ottawa on Sept. 28, 2016. Photo credit: Keith Maddocks